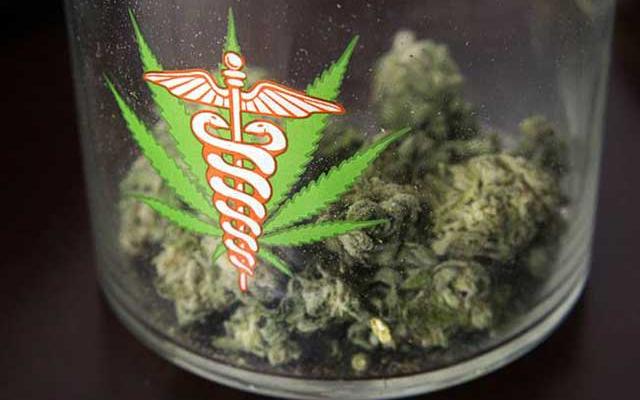 I cover the war on drugs from a conscientious objector's perspective.
Jacob Sullum,   CONTRIBUTOR

Insys Therapeutics, the Arizona-based pharmaceutical company that recently became the biggest financial supporter of the campaign against marijuana legalization in that state, makes an oral spray that delivers the opioid painkiller fentanyl and plans to market another one that contains dronabinol, a synthetic version of THC. Insys says it gave $500,000 to the main group opposing Arizona’s legalization initiative because the measure “fails to protect the safety of Arizona’s citizens, and particularly its children.” But one needn’t be terribly cynical to surmise that Insys also worries about the impact that legalization might have on its bottom line, since marijuana could compete with its products.

A new study suggests Insys has good reason to worry. In an article published last week by the American Journal of Public Health, Columbia University epidemiologist June Kim and her colleagues report that fatally injured drivers are less likely to test positive for opioids in states that allow medical use of marijuana. That finding, together with the results of earlier studies, indicates that making marijuana legally available to patients saves lives by reducing their consumption of more dangerous medications.

Kim et al. collected data from the Fatality Analysis Reporting System (FARS) for 1999 through 2013, focusing on 18 states that drug-tested at least 80% of drivers who died in crashes. They found that drivers between the ages of 21 and 40 were half as likely to test positive for opioids in states that had implemented medical marijuana laws (MMLs) as in states that had not.

“Among 21-to-40-year-old deceased drivers, crashing in states with an operational MML was associated with lower odds of testing positive for opioids than crashing in MML states before these laws were operational,” the researchers write. “Although we found a significant association only among drivers aged 21 to 40 years, the age specificity of this finding coheres with what we know about MMLs: a minimum age requirement restricts access to medical marijuana for most patients younger than 21 years, and most surveyed medical marijuana patients are younger than 45 years.”

The fact that a driver tested positive for opioids does not necessarily mean the painkillers he took contributed to the crash, so it is not safe to draw any conclusions about medical marijuana’s impact on traffic safety from this study. But the FARS data are an indirect way of measuring the extent of opioid consumption in a given state. Kim et al. note that “severe or chronic pain is among the most common indications cited by medical marijuana patients.” It therefore makes sense that opioid use would decline (or rise less) in states that recognize cannabis as a medicine.

The FARS numbers reinforce the results of another recent study, published last July in the journal Health Affairs, that looked at prescriptions covered by Medicare from 2010 through 2013. Ashley Bradford, a graduate student in public policy at the University of Georgia, and her father, W. David Bradford, an economist at the same school, found that “the use of prescription drugs for which marijuana could serve as a clinical alternative fell significantly once a medical marijuana law was implemented.”

Story Source: The above story is based on materials provided by FORBES
Note: Materials may be edited for content and length
Click here to read original article
Posted by YDCtv at 12:00 AM