(CBS News) Smoking marijuana may provide relief from multiple sclerosis symptoms, a new study suggests. People with MS who smoked pot reported less pain and spasticity - or muscle tightness - but it came at the expense of their cognitive abilities, the study found.

Read more
Posted by MSnewsChanel.com.com at 3:26 PM No comments:


NFL players could soon be allowed to use marijuana to treat pain if they are in states where the drug has been legalized for either medical or recreational use, the league's commissioner said last week.

Currently, marijuana is on a list of banned substances prohibited under the NFL's substance abuse program.

However, the marijuana recently has been legalized for medical and recreational use in a number of states, including Colorado, Washington and Arizona. But because the drug is on the league's list of banned substances, players living in those states could face consequences from the NFL even if they are using the drug legally.

'I don't know what's going to develop as far as the next opportunity for medicine to evolve and to help either deal with pain or help deal with injuries but we will continue to support the evolution of medicine,' NFL Commissioner Roger Goodell said in an interview with the Associated Press on January 7.
Marijuana has been approved in several states to treat varying ailments, including chronic pain. Given the addictive qualities of other pain medications NFL players often

Read more
Posted by MSnewsChanel.com.com at 3:10 PM No comments:

WATCH THIS SLIDESHOW ON MEDSCAPE: YOU MIGHT NEED YOUR MEDICAL ID

Posted by MSnewsChanel.com.com at 2:39 PM No comments:

Study: Cannabidiol provides long-lasting protection against the deleterious effects of inflammation in a viral model of multiple sclerosis: a role for A2A receptors.

Abstract: Inflammation in the central nervous system (CNS) is a complex process that involves a multitude of molecules and effectors, and it requires the transmigration of blood leukocytes across the blood-brain barrier (BBB) and the activation of resident immune cells. Cannabidiol (CBD), a non-psychotropic cannabinoid constituent of Cannabis sativa, has potent anti-inflammatory and immunosuppressive properties. Yet, how this compound modifies the deleterious effects of inflammation in TMEV-induced demyelinating disease (TMEV-IDD) remains unknown. Using this viral model of multiple sclerosis (MS), we demonstrate that CBD decreases the transmigration of blood leukocytes by downregulating the expression of vascular cell adhesion molecule-1 (VCAM-1), chemokines (CCL2 and CCL5) and the proinflammatory cytokine IL-1β, as well as by attenuating the activation of microglia. Moreover, CBD administration at the time of viral infection exerts long-lasting effects, ameliorating motor deficits in the chronic phase of the disease in conjunction with reduced microglial activation and pro-inflammatory cytokine production. Adenosine A2A receptors participate in some of the anti-inflammatory effects of CBD, as the A2A antagonist ZM241385 partially blocks the protective effects of CBD in the initial stages of inflammation. Together, our findings highlight the anti-inflammatory effects of CBD in this viral model of MS and demonstrate the significant therapeutic potential of this compound for the treatment of pathologies with an inflammatory component. Read more
Posted by MSnewsChanel.com.com at 2:01 PM No comments: 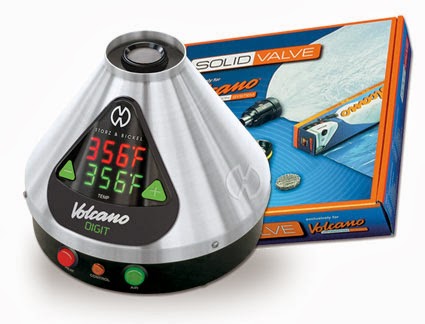 The Volcano Vaporizer has become a coveted status symbol for posh pot smokers, who say it draws out the drug's aroma like "the bouquet of a wine"

Read more
Posted by MSnewsChanel.com.com at 4:12 AM No comments: