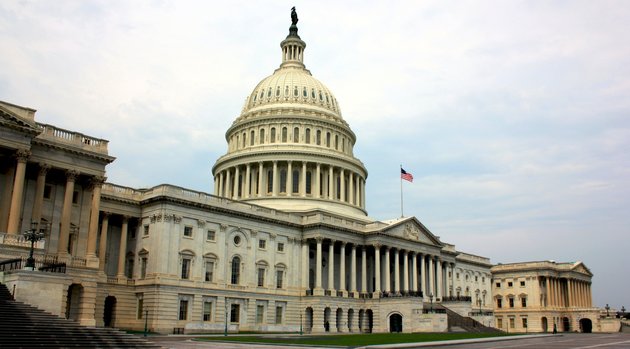 J.CASTRO VIA GETTY IMAGES
Congressional leadership removed language from a spending bill that would have allowed Veterans Administration doctors to recommend medical marijuana to patients.

An effort to allow veterans to access medical marijuana in states where it’s legal died Wednesday night when Congress passed a spending bill without the provision included.

The Veterans Equal Access Amendment would have nullified a Department of Veterans Affairs standard that keeps its doctors from recommending medical cannabis as treatment for post-traumatic stress disorder, pain and other conditions experienced by veterans. Veterans currently seeking medical pot must obtain a doctor’s recommendation outside of the VA system and pay the expense out of pocket.

The amendment, authored by Rep. Earl Blumenauer (D-Ore.) and Sens. Steve Daines (R-Mont.) and Jeff Merkley (D-Ore.), passed both chambers of Congress earlier this year as part of a spending package funding the Veterans Affairs department.

But in June, the provision was stripped from the final version of the bill during conference committee. Blumenauer, Daines, Merkley and other supporters of the provision lobbied their colleagues to get the amendment added to the bill again.

“We feel the failure of the Conferees to include either provision is a drastic misfortune for veterans and is contrary to the will of both chambers as demonstrated by the strong bipartisan support for these provisions,” read a letter sent to congressional leadership.

The amendment was never readded, and the Veterans Affairs spending package passed Wednesday as part of the continuing resolution to fund the government.

“It’s incredibly frustrating and disappointing that despite broad bipartisan, bicameral support, a handful of out-of-touch lawmakers put politics over the well-being of America’s wounded warriors. Our veterans deserve better,” Blumenauer said in a statement on Thursday. “We will continue to seek every opportunity to make sure they have fair and equal treatment and the ability to consult with, and seek a recommendation from, their personal VA physician about medical marijuana.”

Medical marijuana is currently legal in 25 states and the District of Columbia, and several other states will vote in November on whether to legalize cannabis for medical use.

The VA doesn’t condone medical marijuana as a treatment for PTSD or other conditions due to the lack of studies on the effectiveness of the substance in easing post-traumatic stress. Still, many veterans have turned to the substance as an alternative to prescription antidepressants or painkillers, and some states specifically list PTSD as a condition for which doctors can recommend cannabis.

The Drug Enforcement Administration announced in August it would open the door to more research on medical uses for marijuana, which could lead to eventual acceptance by the VA. However, the DEA still classifies all forms of cannabis as Schedule 1, the “most dangerous” category of drugs.

The American Legion, the country’s largest wartime veterans organization, came out earlier this month in support of allowing veterans to access medical marijuana, and urged Congress to remove cannabis from the Schedule 1 designation.


Story Source: The above story is based on materials provided by HUFFINGTONPOST
Note: Materials may be edited for content and length
Click here to read original article
Posted by YDCtv at 12:00 AM