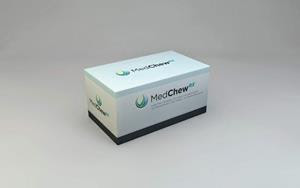 The Reuters article documents AXIM’s clinical trials in The Netherlands on MedChew Rx™ to address pain and muscle spasticity in multiple sclerosis (MS) patients – and also compares AXIM® to UK-based GW Pharmaceuticals’ Sativex® as well as Botox®  and baclofen.

Reuters’ statistics in the article emphasize: “There is no cure for multiple sclerosis, or MS, which affects about 400,000 people in the United States. About 80 percent of patients suffer from spasticity, a condition often treated with the muscle relaxant baclofen.” Worldwide, there are about 2.5 million diagnosed with MS.

By the numbers, Reuters points out that Sativex™ costs MS patients on average 5.56 UK pounds, or $8.24 USD per dose, with an estimated use of four doses per day. The U.S. market that MedChew Rx™ is addressing can then be estimated at more than $4.8 billion annually. The article also clarifies, “But state health systems in some countries, including GW's home market, do not consider the drug sufficiently cost-effective to justify coverage.”

Affordable healthcare is a key initiative for AXIM Biotech. The Company has plans to pass on cost savings to patients through MedChew Rx™, which is a patented new cannabinoid-based medicinal delivery method for many indications including pain and spasticity in MS.

Reuters reports that, “The company says it will be able to price its gum cheaper than a major competitor after securing a ‘significant’ discount on cannabis made available by the Dutch government, which has a policy of promoting the drug for medicinal use.”

In addition to the Health Ministry of The Netherlands which is sourcing the pharmaceutical-grade cannabis for AXIM® Biotech’s product development, the Company has assembled a world-class roster of leading health organizations and professionals. Also supporting the Company’s efforts include:

Bedrocan – The only company in the world producing full bud, standardized medicinal cannabis, Bedrocan is under contract with the Ministry of Health of The Netherlands. Bedrocan provides the base materials for AXIM’s clinical trials.

Professor John Zajicek – The world’s authority on cannabis and neurodegenerative diseases, Prof.  Zajicek is a member of AXIM® Biotech's advisory board, and also the Chair of Clinical Neuroscience University of St. Andrews U.K., and is entrusted to conduct AXIM’s clinical trials on pain and spasticity in multiple sclerosis.

Syncom BV – A world leader in specialized pharmaceutical chemistry and manufacturing, Syncom BV, is tasked with isolating and purifying the cannabinoid molecules for AXIM’s MedChew Rx™.

QPS – A contract research organization specializing in discovery, pre-clinical and clinical drug development, QPS is entrusted to manage AXIM’s phase 1-3 clinical trials. Leadership at QPS who are involved in AXIM’s MedChew RX development include: Dr. Jan-Bart Hak - Division Director of Clinical Research at QPS, and Dr. Willem J. (Pim) Meijler a Senior Medical Advisor for QPS who is a pain specialist with years of monitoring the effects of cannabis in MS patients. Dr. Meijler will determine proper dosing and efficacy.

Wageningen University – Dr. Renger Witkamp, Prof. of Nutrition and Pharmacology at Wageningen University and a member of AXIM® Biotech’s Advisory Board, is researching new applications for cannabis on diseases related to inflammation that AXIM is developing MedChew Rx™ for.

Through these combined efforts, AXIM® Biotech is set to unveil the world’s next platform for improved and predictable medicine delivery in a convenient piece of chewing gum. It is important to note that MedChew Rx™ has multiple health indication applications outside of pain and spasticity in MS.

“AXIM® is very proud and excited to have our efforts open up new drug markets and have the Company’s clinical trials on MedChew Rx™ documented by a top global news agency such as Reuters,” states Dr. George E. Anastassov, MD, DDS, MBA and Chief Executive Officer of AXIM® Biotech. “The Reuters article correctly documents AXIM’s fast track to a large share of the market and the Company’s place among the very top leaders in the pharmaceutical industry.”

Dr. Anastassov continues, “Although certain similarities in APIs with other available or in developmental stage pharmaceuticals exist, what makes MedChew Rx™ unique and superior is its precise, controlled release mechanism to the oral mucosal capillary circulation, thus bypassing the first-pass, liver metabolism.  Second, it provides neuroprotective and neurostimulatory benefits derived from the act of mastication.  These beneficial effects become quite apparent with the recent introduction and FDA approval of QuilliChew ER (methylphenidate HCL in a chewing gum format) for treatment of ADHD by Pfizer.”

Professor John Zajicek, a member of AXIM's advisory board, says of cannabis, “Chewing gum is a potentially good route as it would avoid respiratory irritations associated with other delivery methods.  It will deliver a prolonged dose without peaking too much.”

Reuters concludes that AXIM® Biotech, “…hopes its mint-flavored gum will be on sale in the United States as early as 2017. This will depend on whether the Food and Drug Administration grants an accelerated development timeline that would allow it to leapfrog GW, which is waiting to discuss with the agency if and how a late-stage study for Sativex will proceed. AXIM thinks its case could be bolstered by research already undertaken by GW, which has established ‘evidence of safety’ for its drugs derived from natural cannabis.”

Aside from the clinical trials that are ongoing in the EU, AXIM® Biotech has secured the down payment on land to build the Company’s manufacturing facility in the city of Almere, The Netherlands.  The state-of-the-art, 6,000-square-meter parcel will house a clean laboratory zone, storage areas, offices and technical rooms as well as manufacturing facility equipment. The plans are compliant with the highest European and International standards. AXIM® Biotech will produce unique pharmaceutical and nutraceutical products – all sourced from hemp.

Research shows that the industrial hemp plant can produce more than 50,000 products. Focusing on innovations in health and the environment, AXIM® Biotech’s Almere facility will include manufacturing in the following product categories:

AXIM® Biotech’s manufacturing plans are to leave a net negative carbon footprint in the environment, setting a major global example for “green” innovation and manufacturing.

AXIM Biotechnologies (OTC:AXIM) is an innovative biotechnology company focusing on research, development and production of pharmaceutical, nutraceutical and cosmetic products where we prioritize the well-being of our customers while embracing a solid fiscal strategy.  For more information, visit the Company website at www.AXIMBiotech.com.

This press release may contain certain forward-looking statements and information, as defined within the meaning of Section 27A of the Securities Act of 1933 and Section 21E of the Securities Exchange Act of 1934, and is subject to the Safe Harbor created by those sections. This material contains statements about expected future events and/or financial results that are forward-looking in nature and subject to risks and uncertainties. Such forward-looking statements by definition involve risks, uncertainties and other factors, which may cause the actual results, performance or achievements of Axim Biotechnologies, Inc. to be materially different from the statements made herein.

AXIM Biotechnologies does not sell or distribute any products that are in violation of the United States Controlled Substances Act (US.CSA). The company does grow, sell, and distribute hemp-based products.

The photo is also available at Newscom, www.newscom.com, and via AP PhotoExpress.


Story Source: The above story is based on materials provided by GLOBENEWSWIRE
Note: Materials may be edited for content and length
Click here to read original article
Posted by YDCtv at 8:00 PM